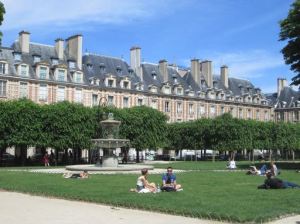 It’s that time of year folks – dust off the picnic blanket, grease yourself up in factor 15 and hit the park for a sizzling session or two of self-browning. Paris offers parks a-plenty for the purpose, though those with a more refined sense of outside fun in mind, might want to head to one of the city’s sculpted gardens.

Well hold your cool box right there sun-seeker, Paris hasn’t made this outdoor bronzing business quite as easy as we’d all hope, and actually not every green spot in town is open to receive a tartan blanket or ten. Think you can lounge uninterrupted on the grassy knoll in front of Sacre Coeur? Nope. You’ll get whistled at by killjoy guards before you’ve even settled in. The Jardin de Luxembourg might equally seem like a nice spot, but in fact amongst all that lush lawn, there’s only a tiny parcel that you (and a thousand other sun worshipers) are allowed to sit on. And each time I’ve been, it’s been in the shade.

If you want to keep your foray into the great green relatively central, then there’s only one real option where the grass is fair game, and the surroundings couldn’t be classier – the Place des Vosges, a geometrically perfect square straddling the 3rd and 4th arrondissements. If Louis XIV (aka ‘The Sun King’) had ever decided to take his title literally and mingle with the masses in a sunbathing sesh, then this is surely where he’d have done it. 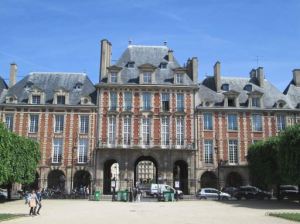 Originally christened Place Royale (see, told you it was classy), it was the work of Henri IV (or at least his building crew) and was inaugurated in 1612, remaining to this day the oldest planned square in the city. It’s also one of the most elegant, and the prototype for many square places dotted around Europe, and single-handedly responsible for making the Marais one of the wellest-to-do parts of Paris. If it’s typically classically decadent Parisian architecture you want, here’s where to find it in geometric perfectness. 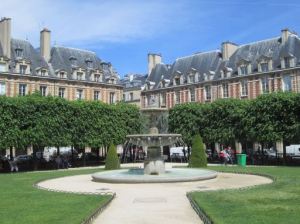 For your lounging pleasure there are ample patches of lawn to spread your picnic on, or plenty of shade under the rows of clipped linden trees if the French sun begins to bite. Play spot the jogger skirting the edges, let the kids battle it out in the sand pit or simply lay back and let the regal fountains trickle you into a reverie. Mostly though, just let your mind wander amongst the lucky residents enjoying such an address and try to come up with ways to make enough money to follow them (you’ll need to budget for upwards of €18,000 per m2 FYI). Tax avoidance to fund your dreams may not be in the spirit of the location however, given that the square was named after the people of Vosges in 1799, the first department in the country to pay their taxes to fund the revolution.

For a sneak peek inside before you get home to count the coppers in your piggy bank, head to the south east side of the square to have a wander through Victor Hugo’s house, where he lived from 1832-1848, just after the publication of The Hunchback of Notre Dame. See if you can get an idea of the creative magic that lived here too – it was here where the seeds of Les Misérables were sown and the fledgling work began to take shape (finished eventually in 1862). Writing a bestseller might be the only chance you’ll ever have of living here after all…