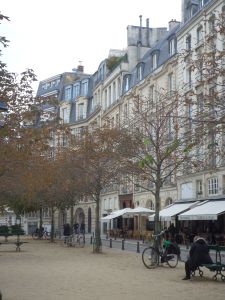 ‘I Love Paris in the Springtime’ is the old refrain, and Cole Porter certainly wasn’t wrong in his affection for the season of abundance. But meandering through the rich hues of spring’s opposite number is one of life’s most colourful pleasures, and whilst Paris may not be able to compete with the kaleidoscope of autumnal colours lighting up say, Vermont, the city promises rain-free skies 90% of the time (so says my leaflet on bike riding produced by the mairie, they obviously didn’t mean this week) so a stroll in the cool autumn wind is just crying out for a spot on this month’s schedule.

Yes, my love of forests is well known, but sometimes a good old urban balade is what is called for (official rules on flâneur-ing can be found here) to reconnect with my Parisian persona. And at the western end of the Île de la Cité in the 1st arrondissement, you’ll find Place Dauphine, one of the oldest and prettiest spots the capital can muster, just aching for its leaves to be kicked and its quaint terraces and benches to be occupied.

When your mind conjures images of Paris, this is where the fictional you will be strolling, with a belly full of croissant and a mind singularly occupied with choosing where to have your early evening apéro (and for film fans, it’s where Emilia Clarke’s character reads the letter at the end of Me Before You, said restaurant pictured). And Paris’ revolutionary-rich, bloodthirsty past won’t even be able to get a look in, as in this little slice of Paris, its history is unusually tame; except for being renamed Place Thoinville during the revolution in 1792-1814, and having its eastern edge destroyed by fire during fighting in the Paris Commune in 1871, that’s all the drama you get. Yes, for Paris that is remarkably subdued. 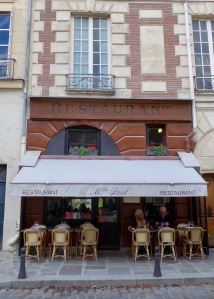 Henry IV’s second public square project after Place Royale (now Place des Vosges) it’s not actually a square at all, but a triangle (the oxymoron inside me twitches very uncomfortably at this fact) and was completed in 1616, carrying the name of his son, the then dauphin and future Louis XIII. In stark contrast to its decadent elder sister originally intended to appeal to the upper echelons of society, the houses lining this square (shudder) were built not as luxury homes for the rich, but cosy dwellings for mere merchants and common folk. But, given its slap-bang central location, these days this patch is naturally prime real estate where the price for a slice of bricks and mortar will set you back in excess of an eye-watering €20,000 per square metre, making it ones of the city’s costliest addresses. 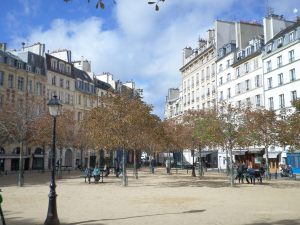 For those of us without piggy banks the size of Texas, a stroll is a more budget-friendly option, though given the well-to-do location, you might want to do a few turns and then head elsewhere for a coffee and sticky bun. Or why not come prepared and spend an hour or so people watching with a flask of warming hot chocolate, or push the boat out and fill it with vin chaud? Once sated, head towards the western entrance back on to Pont Neuf, making sure you clock the two houses nearest the road which are the only two remaining originals. Then you can continue your stroll across Paris’ oldest bridge, being careful of course, not to fall in. Actually, maybe the vin chaud isn’t the best idea after all…