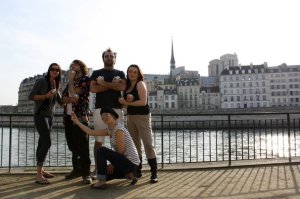 Since I’ve been living in Paris, I’ve eaten countless baguettes, hoovered my body weight in croissants, said ‘bof’ a lot, and purchased a stripy t-shirt. It’s really only my pétanque skills that need polishing up, and then I’ll be a bona fide Frenchie. Handily though, I don’t need to worry anymore about the stigma of hanging out with old men with round bellies on gravelly terrain with my hat pulled down to hide my face, apparently, that old French leisure sport is the new hipster trend. 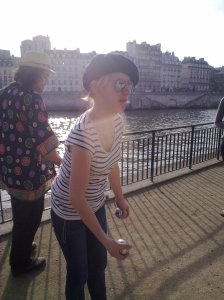 If you wander down the canal after work these days or cross through one of the city’s beautiful parks (the flat ones, obviously), then the chances are you’ll hear the clinking of boules being thrown, and see the concentration etched on players faces as they survey the scene. What used to be a game popular with the older generation, is now the hipsters’ sport of choice. Rumour has it that even the likes of actress Diane Kruger enjoy an odd round or two.

The rules are relatively simple – you can play singles, doubles (3 balls each) or even triples (2 balls each), and the team with the ball closest to the jack or cochonnet wins. The team furthest away from the cochonnet throw until they become the closest and then the other team have their go. The winning team scores a point for the ball closest to the jack and for every ball closer than their opponents. The first team to hit 13 points wins.

Aside from a nice shiny set of boules (see Decathlon or Go Sport), all you need is somewhere to play, and a flat piece of gravel or lawn will do nicely. Some of the nicer spots on paris include Canal de l’Ourc, Jardin de Luxembourg or Jardin de Plantes, though there are plenty of spots to be down by the Seine if you’re confident you won’t end up launching a ball into the water.

To celebrate this new and growing trend, the city hosts this saturday day 2 of its pétanque festival Petanque Paradise, being held on the edge of the 12th near the Bois de Vincennes on the Route des Fortifications. They’ll be plenty of players showing off their skills if you fancy seeing how it’s really done, but also DJs, food stalls and workshops to keep you occupied if your talents aren’t up to scratch. Check the official website  for more details. Oh, and don’t forget the pastis.