And we’re off! Lockdown has been lifted, and the desperate scramble for holiday places begins. Maybe you’ve spent months dreaming of exotic climes, or a germ-free country break away from the confines of a disease-ridden city. Me? I’ll always choose the train as my vacation vehicle to transport me somewhere green, though with the frantic peak holiday months of July and August soon upon us, I think I’ll sit tight for now and scoot off somewhere later in the year.

But you needn’t be tied to a travel itinerary to fully appreciate the beauty of Paris’ railway stations, worth a visit on their own merits. We’ve already dipped our toe in here, but this time we’ll don our curiosity specs and take a look at Gare de l’Est up close. We’re not heading there for a hardcore trainspotting sesh you understand (though if that punches your ticket, go right ahead) but to have a wander around the building itself, appreciating its architectural charm and rich history.

One of the six major stations in the city along with gares du Nord, Lyon, Austerlitz, Montparnasse and Saint-Lazare, it was built by architect François Duquesnay, who wasn’t known for much else. He sadly departed for the platform in the sky at the end of 1849, the year the station opened, so never lived to see it used to its full potential. Originally conceived to serve the Paris-Strasbourg line and called ‘Embarcadère de Strasbourg’, it soon expanded its service to serve the city of Mulhouse near the German/Swiss border, and was renamed ‘Gare de l’Est’ in 1954. Significant further expansion and renovation happened in 1885, 1900 and 1931, and today the station welcomes nearly 38 million passengers a year, carrying them mostly eastwards to major French and European cities. 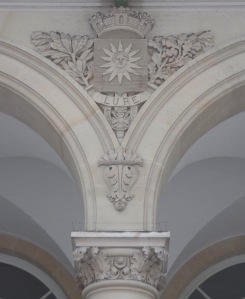 The intricate mouldings on the façade depict many of the cities it serves, and its crowning glory are two magnificent statues representing Strasbourg on the western side, and Verdun on the east. If you’re hanging outside the main entrance to have a look, you’ll either be standing on the place du 11-Novembre-1918 or further back on the rue du 8-Mai 1945, both so named in memory of the two world wars. And it’s WW1 in particular that’s at the heart of the station’s history, as it facilitated the mobilisation of huge numbers of French troops towards the Western Front (the statue of Verdun remembers the longest and bloodiest battle of the conflict that ended in French victory). Head inside to the main hall to have a look at Albert Herter’s gigantic mural Le Départ des poilus, août 1914 (above), depicting the infantrymen’s departure with the artist’s son centre, holding his cap, rifle and flowers aloft. 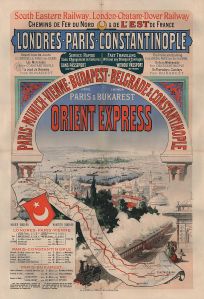 In happier times, the station lays claim to having been the starting point for possibly the world’s most famous train journey, the first voyage of the Orient Express in 1883 from Paris to Istanbul (then Constantinople). The luxury service ran from the capital until 2007 (and stopped entirely in 2009) and inspired enough legends, stories, films and documentaries to fill one of its own carriages. There is still a privately-run version in operation using original carriages from the 20s and 30s, though you’ll need serious coin to afford an overnight cabin. Maybe a gold-plated corona mask is included in the price…

However you decide to travel this summer, don’t forget that the journey is just as important as the destination, and keep yourselves and your loved ones safe along the way. Bonnes vacances!