Greetings readers from the warm embrace of the Granny Flat, where hot chocolate powder and thermal socks have been solidly dominating proceedings. Thankfully the snow has abated, though the rain ahead is hardly a welcome replacement. Given I’m lucky enough to be working from home these days, I don’t have to venture out too often into the soggy mists, though once in a while stew stocks need replenishing and a spell in the outdoors just can’t be avoided.

Now as much as a bracing stroll is good for the soul, when it comes to self-meandering around a chilly capital, sometimes it’s just the most sensible idea to get down. Not in the James Brown sense you understand (although that may help to raise the body temp somewhat), but ‘get down’ into the bowels of the city, and let the wonderfully efficient metro (most of the time) scurry you around the place, all warm and toasty like.

Now I’ll wager a vin chaud that like me, those who regularly use the metro normally enter the city’s belly, head down and hurrying, without a thought for the magnificence of the portal marking the opening of this underground world. And like me, you’d be a lot poorer for it, ignoring a whole host of aesthetic pleasures and historical texture that could make your mind, and life, a whole lot richer. So next time those grey steps into the concrete underworld beckon, take a thought for the souls who decided that a fancy-pants ‘metro’ sign would make everyone’s day more the nicer. 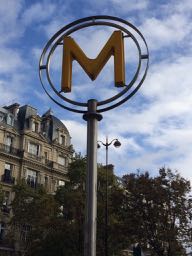 As with most things in the capital, the collection of metro signs on display is delightfully mismatched, though each marker is a unique product of its own time period. Modern styles tend to make up their own rules (line 14 has been churning out the best examples since 1998) and the future is likely to include quite the kaleidoscope of varieties. But cast your eyes around the rest of the metro infrastructure pointing out the older lines, and you’ll find three distinct styles emerge.

The most modern is the mât jaune, or ‘yellow mast’; that nocturnally glowing M nestled in a circular surround. Cropping up from the late 60s, this canary beacon was intended to resemble a radio antenna, and you never know perhaps it is, listening to our every metro manoeuvre grand frère style. In the red corner are a collection of similar designs, declaring either ‘metro’ or ‘metropolitan’ in a rectangle surrounded by ironwork of various artistic expressions. The most prominent of these are the Val d’Osne mast, recognisable by its ornate frieze (see metro Saint Paul) and the art deco Dervaux style (metro Trocadéro for example), whose much simpler form was a result of the move away from decorative embellishment that took hold in the 1930s. Most variations of the red/dark green design sport a globe lamp on top (Lamarck Caulaincourt pictured), attracting eager travellers down into the depths. 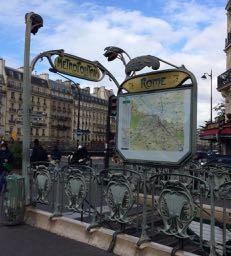 But anyone who’s anyone knows that the real king of the metro portal is Hector Guimard, whose botanically-inspired art nouveau entrances are as quintessentially Parisian as a croque monsieur. Plenty are still available to appreciate, though of the original 141 that were constructed in line with the birth of the metro in 1900, only 86 remain. Though Guimard and his style are much revered today, his critical reception in his day wasn’t quite so positive, with Parisians lacking in enthusiasm for the design when it first emerged (do they like anything when it first appears? Eiffel Tower and Pompidou Centre, here’s looking at you). A victim of media vilification, much of his work was demolished as a reaction against him, though happily there are still come cracking examples to make a beeline for. 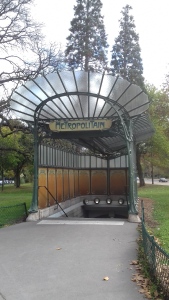 Five styles were originally created, from simple railings to elaborate glass pavilions, of which sadly only three remain. Those at Châtelet (a reconstruction) and Abbesses (originally located at Hôtel de Ville) are the best known, but by far the most complete and impressive version is situated at metro Porte Dauphine (an absolute must-visit if you’re on your way to the Bois de Boulogne), a glory to behold with its fan shaped awning and floral paneling intact. They certainly don’t make ’em like they used to.

So in these meteorologically uncertain times, when a metro ride is in order, make sure you take a moment to look up, maintaining necessary vigilance for dog poo spotting of course. In return, the metro gods may even give you a seat…