The 80s eh? Thank God that decade’s long gone. It was just so flammable. We’re all much safer now there are a few decades between us and those crispy Flock of Seagulls hairdos. But ha ha! Paris shows it has a sense of humour and has held on to one of the most iconic symbols of those sacred fluoro years, that looks down on us from up high on thousands of the city’s corners to make sure we’re inspired to hum a bit of Wham! from time to time. Take that chic crowd.

Before you give yourself a crick in the neck scouring the storeys for Madonna’s conical bra, I’ll give you a hint as to what you’re looking for (hey, if you haven’t picked up the hint from the photos by now, then perhaps Twister is more your game). The kids these days may have computer graphics that are so real they mess with your mind, but back when I was a nipper, zapping space invaders was all we needed (well, after that two stick tennis game where you’d turn the knob to go up and down and that was all you could do).

One Frenchman has taken his worship of the pixelated monsters into adulthood, and has scattered the streets of the capital with various homages to his computer critter passion, hitting the START button in 1996. If you’ve spotted one already, don’t think you’ve defeated the Boss just yet, there are at last count, 1138 of them to find, and that’s just in Paris – this guy has gone global, but more of that later. 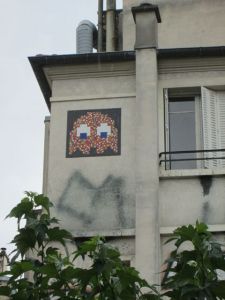 Just as the video game has evolved over the years, then so has his style and he’s branched out into a dizzying array of cartoon and vintage computer graphic figures, from good ol’ Mario to Oscar the Grouch (even street artists get the grumps it seems). And don’t be fooled by impersonators neither (Mama didn’t raise no fool) his website documents some of his work, so you can try and cross reference your find to check if it’s legit. 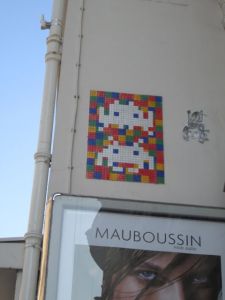 Want to shake this mysterious urban art guerrilla by the hand? Yeah, right. You’ve got more chance of beating the highest Pacman score on the arcade machine. Very much sharing a love of privacy with Britain’s Banksy, ‘Invader’ as he prefers to be called, is as hard to find as a Sinclair ZX Spectrum in perfect working order, keeping his face and identity a fiercely guarded secret.

He works exclusively at night and hides his true self behind a mask (in my mind it’s a Darth Vader one), and despite being arrested umpteen times, he’s managed to invade 60 cities in 30 countries including New York, London and Barcelona, and as far afield as Tanzania and Brazil. In France alone he’s left his mark on 31 cities, and still managed to keep his real persona safe. The man’s an artistic ninja.

By why would a grown man make it his life’s mission to create a giant Pink Panther out of tiles and risk arrest by gluing it to a random wall? Like most artists, there’s a well considered point to it, Invader’s being what he sees as the limited accessibility to art galleries and museums. He’s assumed the duty of bringing art to the masses on a daily basis, his work being gifts to the general public. And it’s not so random either; his sites are well researched and extremely carefully chosen, often selected with the help of the local community. 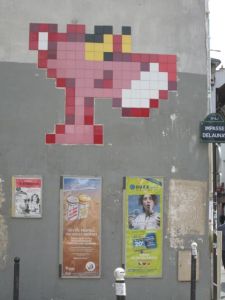 Surely these things go missing all the time you might ask, as has been the fate of some of Banksy’s pieces? In some of the world’s cities, it’s true that his masterpieces have been removed by local authorities, but individual wannabe art dealers will have a tougher time with a hammer and a chisel given that Invader uses special glue and cement to keep his mosaics hangin’ tough. Rather than diminishing in number, his mission continues, and along the way he has high-fived new players to the game, inspiring a huge number of other street artists in the process. Game Over? Not a chance.

See the Banksy-produced documentary Exit Through the Gift Shop for more info (featuring Invader’s cousin) or check out his official website to advance to the next level. Or just go native and keep your eyes peeled as you go about your way (this is real life remember, no points for defeating pedestrians while you’re searching for the hidden treasure).