If you were one of Paris’ 20 arrondissements, which one would you be? The wealthy 8th, the shopaholic 1st? Maybe the hipster 11th is more your bag? Whichever one you think suits you best, I’ll bet my morning croissant that you didn’t pick the 19th – that largely forgotten north-east corner of the city that many a tourist fails to include in their holiday itinerary. Even Parisian residents have been immune to its charms over the years, and honestly who would blame them given the area’s history as the slaughterhouse centre of the city? 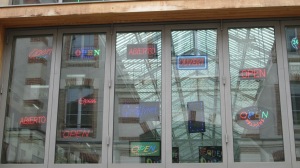 But tourist or local, anyone who’s anyone has woken up to the 19th’s awesomely shabby creative chic, and the fact that it has a personality that other quartiers should start to be very, very jealous of. I’ll be taking you round the many of its enchantments in months to come, but for now I want to introduce you to an achingly cool contemporary art space that would turn even the hippest corners of London pea-green with envy.

Jump on the metro if you must, but head east from Marx Dormoy along Rue Riquet to the corner of Rue d’Aubervilliers on foot, and you’ll be given a stunning glimpse into the creativity that’s at work in this part of Paris, when you hit surely one of the best graffiti walls the city has to offer (ancient blog post on exactly that here). It extends all the way up Rue d’Aubervilliers if you have time for a stroll to check it out, if not, head straight for the building on the right, an imposing modern art space offering sanctuary and inspiration, whatever your creative persuasions. 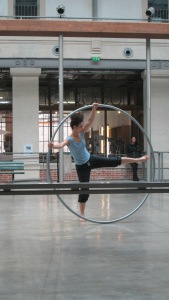 Completed in 2008, this multifaceted cultural centre is a hotbed of local talent, and invites artists of all disciplines to make use of the space to hone their craft, allowing members of the public to see their ingenuity in action. Whether a visual artist, a street performer or urban dance addict, there’s enough room for all to convene in perfect harmony (just watch out for flying juggler’s batons or hula hoops if you’re weaving in between the assembled crowds). Indulging in this creativity-in-progress is happily free to all, whether you’re an observer or an eager participant.

In addition to art in real time, there are also permanent and temporary exhibitions, film screenings, live theatre, dance and music performances (ticket prices vary), and an ever-changing programme of activities open to all from artistic workshops for children in the aptly named ‘Littlie’s House’, to free Qi gong (a close cousin to Tai chi) sessions at the weekends. Those with a more literary leaning will find a free book exchange shed in between to two main halls.

Folk led by their stomachs will find their more basic appetites well catered for with a selection of places to eat, including the main Grand Central Restaurant, hidden café and pizza truck for a fly-by feed. There’s even a nod to our commercial impulses with a book shop and a branch of second-hand wonder chain Emmaüs (see here for my own glowing tribute to my favourite shops in Paris). And the gritty past of the area hasn’t been forgotten either – the site may not have been one of the numerous abattoirs dotted around a century ago, but the two halls used to house the city’s municipal undertakers, processing 150 funerals a day. Maybe the creative ‘spirit’ of days gone past still resides here, I’ll let you be the judge.

All the info you need is here (French and English)