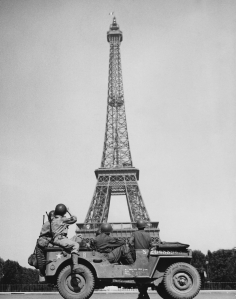 As the holiday season draws to a close and la rentrée arrives once more, it’s time to reflect at the start of a new term just what a year it’s been so far. Phew! You couldn’t have written that one…  I trust you’ve all flexed your vacation wings appropriately, and after our lockdown spring, the freedom to roam around unfettered (mask et al) has never felt so sweet. Well that’s what our selfish modern minds would have us believe anyhow, but during the last week of August Paris knows different, as the 25th of the month commemorates the liberation of the city in 1944, when it was freed from the clutches of the Nazis. If we’re talking freedom, liberty doesn’t scream much louder than that. 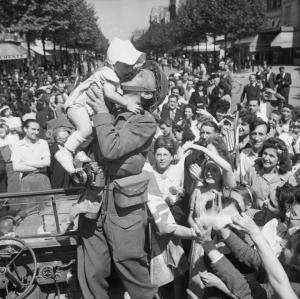 The occupation had begun in June 1940, and the Nazis set up central commands in the most luxurious hotels, changed the capital’s signage and adjusted the clocks to German time. For four long years Parisians endured shortages of food and supplies, rationing and curfews, with the City of Light turning dark every night at 9pm. Many fled to the provinces if they could, and thousands of Jews were rounded up and sent to concentration camps, remembered via black plaques throughout the city today. All in all, pretty bleak days for old dame Paris.

The path to liberty was unlocked by the allied invasion of Normandy on 6th June 1944, which led to an uprising by the French Forces of the Interior (FFI – the military arm of the Resistance) who eventually achieved freedom after a bloody six-day battle with the help of incoming American troops. Germany soon surrendered and it was up to Charles de Gaulle to take the mic and give a rousing speech, followed by four days of much merriment (and wine presumably) and victory parades. Paris was at last free. Viva la France!

Such memories will never fade, but sadly the lives of those present on that joyous day will, so happily there is a dedicated museum in the 14th that relives the event through their voices. Originally opened in 1994 at Montparnasse, in 2018 the collection was moved to a new home at Place Denfert-Rochereau, in a building that used to serve as one of the ancient toll gates for the city, and under which the command headquarters for the liberation of Paris was located. The new Musée de la Liberation de Paris opened its doors in 2019 to much fanfare on the 75th anniversary of the event, bien sûr.

Whereas you might be used to a polyester-suited guide leading you around proceedings in any other museum, here you’re invited to take the arm of two of the time’s greatest figures; key Resistance figure Jean Moulin and military great General Leclerc, or Phillipe Leclerc de Hautecloque (pictured, right) as he was known to his bank manager. Beginning in 1918, the exhibits take you between the two world wars and behind the famous names via photographs, documents, clothing and a whole array of personal artefacts helping you to understand Paris’ journey from peace, to war and back again. Those unafraid of steps can head down below to check out the secret defence bunker occupied by the FFI and serving as a command post for Colonel Rol-Tanguy (after which the Avenue above is named). The museum is free for access to the permanent collection, though a programme of ticketed temporary exhibitions is also available.

While you guys are busy dreaming of being Resistance fighters in the 40s, I’ll be organising my Petit Nicolas pencil case and ironing my PJ bottoms in readiness for a new term at Granny Flat HQ. A bientôt mes amis!