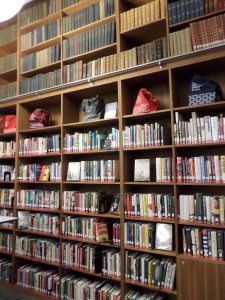 Over the years (if you’ve tuned in) you’ll have no doubt read a few posts on my blog about books (exhibits A, B and C). Well, to bring you the latest, the obsession continues and on a recent trip to the UK I managed to buy no less than 17 books, and that was 11 in the first two days alone – jeepers. In my defence, three were presents and I’ve already inhaled another four, but that still leaves me in double figures. Good job those long, cold winter nights aren’t too far away, and I’m someone who can read (and more importantly needs to read or-else-I’ll-go-mad) 50-odd a year (not that I’m smug or anything).

If it’s books you too are after, English language in particular (the French are pretty obsessed with books too – seems we’re a great fit – but if you don’t read the lingo you’re a bit stuck) then the American Library is the literary Mecca you’ve been looking for. The largest English-language lending library on the European continent, you’re spoilt for choice with over 100,000 books looking for temporary companions, and that’s not even taking into account periodicals, audio-visual and myriad other reference resources. 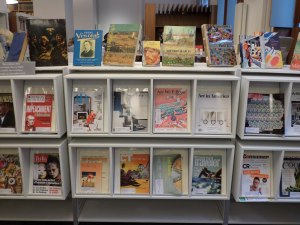 Just a year shy of its 100th anniversary, this vital non-profit cultural association came into being in 1920 thanks to the American Library Association, tasked with bringing books for US troops fighting in WWI to Paris, through donations from libraries across the pond. Their official motto reflects the cause – Atrum post bellum, ex libris lux: After the darkness of war, the light of books, though the idea of books as light counteracts any kind of darkness there is as far as I’m concerned. A concrete base at 10 rue de l’Élysée soon followed, with Edith Wharton amongst the first trustees, and Ernest Hemingway and Gertrude Stein as patrons.

A brave tale of plucky resistance played out during WW2 and the library was responsible for providing books to 12,000 British and French troops. It refused to close its doors and stayed open during the conflict, albeit in a limited capacity, defying rules to exclude Jews from using the service, hand-delivering books to Jewish members who were forbidden to cross the threshold. Americans who fled Paris with library books in their possession wrote back, promising to return the books safely upon their return.

Post-war prosperity saw the library move to the Champs-Élysées in 1952 and in 1965 it moved again to its current premises in the 7th. And just like there are too many books in the world to read, there are simply too many notable names that have been indelibly printed on the pages of the library’s history to mention. Visiting writers, members and speakers over the years have included Samuel Beckett, Colette, Salman Rushdie and David Sedaris, amongst a thousand others. It’s probably easier to write a list of notable literary figures that haven’t in some way been involved over the years. 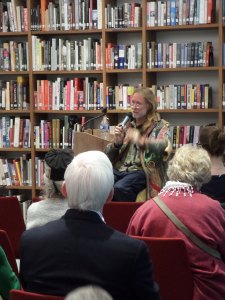 Continuing today in its chief mission to celebrate the written word and life of the mind, after several modern renovations, the library currently counts over 4,000 members (membership for an adult is €12 a month, much cheaper than bankrupting yourself at WHSmith, no?) able to enjoy its books (obviously) as well as reading rooms, work and conference spaces, and an impressive schedule of events and talks. Their twice weekly Evenings with an Author program attracts writers as famous and renowned as you can get, and is open and free to the public (with a suggested donation of €10), though no chatting at the back or I’ll throw the biggest and heaviest dictionary at you. Then you’ll learn a bit about the power of words…