If you’re currently within the confines of the hexagone (France for the uninitiated, in reference to its shape) you can’t help but notice two things. The brutal heatwaves sweeping the nation and the poor (weird? utterly bat-merde crazy?) souls voluntarily climbing up mountains on bicycles in such high 30s-low 40s weather. Yes, the Tour de France is here again, and this time, maybe, just maybe, the French might take it (Update: er, no they didn’t…)

Not only one of nation’s favourite sports and a quite astounding physically demanding challenge to wrap your head around, cycling has managed to reach French cultural spots that other sports just haven’t managed, namely creating a magical partnership between cycling… and patisserie. But to be honest, in a country where food is King, Queen and the whole bloody Royal Family (well they don’t have a real one, remember) it’s amazing it hasn’t happened a lot more often. 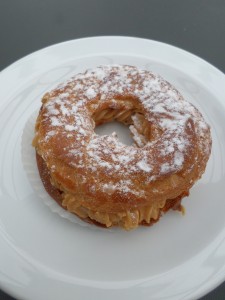 Yes, in addition to having its own clothing line (those natty coloured jerseys), cycling has its own official pastry. And it has done since 1910 when pâtissier Louis Durand was asked by his friend Pierre Giffard to create a dessert to commemorate the Paris-Brest-Paris (or PBP) bike race that he had created in 1891. A prolific sports event organiser and journalist, Giffard founded the PBP as a method of boosting sales of his Parisian newspaper Le Petit Journal (after seeing the success of a 600km Paris to Bordeaux race that was created for that very reason) and by 1895 it seemed that his plan had worked and with a daily circulation of two million it was the world’s most popular newspaper.

Officially the world’s oldest long-distance cycle race (the Tour came along a few years later as a publicity stunt for a rival newspaper) the 1,200km event was designed to show off the capabilities of the humble bicycle, then the sharpest of cutting-edge technology, with a ride from Paris to Brest in Brittany and back again. 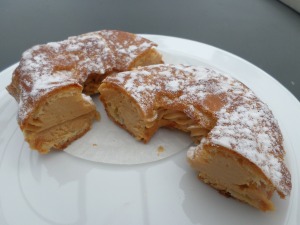 The fact it takes place on two wheels is essentially all it has in common with the hallowed Tour, and rather than taking place every year with a changeable route, the PBP has settled into a four-yearly cycle keeping pretty much the same itinerary, with the 2019 edition due to roll off on the 18th August. Originally a professional race but now exclusively populated by amateurs, this year more than 6,000 riders will take part, with the sole aim of trying to stay in the saddle and complete the challenge in under 90 hours. Much sleeping under hedges and dogged determination will see the participants through, and you can tell your buddies that you would have taken part, but registration is now closed. Excuses for the next four years until the 2023 edition entirely up to you.

If this all sounds a bit too physically and mentally taxing for you, then direct your penny farthing to the bakery and order the Paris-Brest – two circular wheels of choux pastry filled with praline cream and dusted with slivered almonds and icing sugar (I had to eat two just to check the recipe). Most commonly available in small individual pastries, you can also find a much larger version, comparable in size to the tyres on those weird foldable bike things. Given its high calorific value, it was and still is popular with the race riders (yes, during) though they have the luxury of being able to burn off the calories almost instantaneously. I’ll wait for the stifling heat to pass, and then I’ll jump back on my Velib, promise.

Where are we? #garedelest! Find out the story behind this magnificent painting in the main hall in my new blog post! wp.me/p4cITf-yr It may not be the best time for lengthy travel at the moment, but there is beauty to be found at this central station nonetheless! #paris #parisjetaime