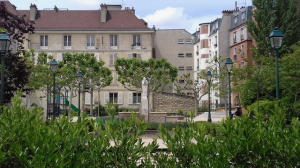 In this fraught modern world, it’s easy to lose our heads from time to time. And if you’re looking for a place where that feels strangely appropriate, then Paris would have to be it. Not in the literal sense you understand, those chop-happy guillotine days are gone (though amazingly it took them until 1977 to quit the slicing; try and wrap your still-attached head around that). But in that brain-exhausting metaphorical sense, be it from politics-induced malaise, commuter rage, or a just-stepped-in-a-thoughtfully-left-dog-turd-right-outside-my-front-door meltdown.

As a capital city, Paris provides us with much that we need in life, and when it comes to a ‘lose your head’ mascot, then damn, she’s even gone and given us one. And lo and behold, you already know the chap having no doubt seen his name dotted around the place – enter Saint Denis. Seeing as though there’s a statue of him not far from Granny Flat HQ, I have a grandfather called Dennis, and that I’m these days only ever an inch away from losing my head in these tumultuous times, I thought he’d make an excellent candidate for a blog post. Hold on to your hats (more importantly the heads underneath them), and away we go.

One of the patron saints of France (there are a handful, including Joan of Arc, depending on who you ask) this 3rd-century Christian martyr was allegedly crowned the first bishop of Paris in around 250 AD, though details about this (and his life in general) are sketchy, given how far we have to travel back to meet him. It’s accepted that he travelled to Paris, then a city in Gaul known as Parisius after its inhabitants the Parisii tribe, with his disciples Rusticus and Eleutherius to convert the masses to Christianity. This naturally didn’t go down too well with the Roman occupiers, and the three men were arrested, questioned and imprisoned for their efforts. 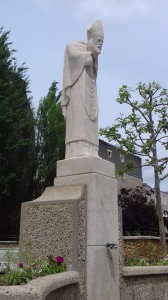 Never an era for punishing crimes lightly, the trio were sentenced to death by beheading, and marched up to the highest hill in the city, which then after became known as Mons Martyrum, ‘the hill of the martyrs’, or as it’s better known today, Montmartre. Normally a beheading is a fairly definitive full stop in a human life, but Saint Denis had other ideas, and the most widely-circulated legend says that next, he picked up his head and marched north, preaching as he went, until his body gave up and he fell and died at a spot in what is now known as the suburb as Saint Denis (coincidence, no?).

Here he was buried and a shrine erected in his honour (no mention of the other guys) and in 475 Saint Genevieve (another patron saint, but more of her another time) built the first chapel in his name. His relics were transferred there in 636, and by the 12th century the beginnings of a new, much grander church were under construction, elements of which are still standing today. From quite gruesome origins now stands a much-celebrated gothic cathedral (not far from the modern temple that is the Stade de France), the burial place of most the the French kings, and their significant others, from the 10th to 18th centuries. 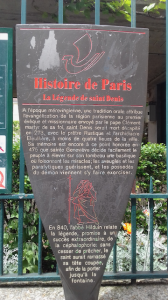 Those au courant with the French tradition of saints days can raise a toast to Saint Denis on October 9th, though to pay your respects in person, you’ll find statues on the façades of the cathedral at Saint Denis (and his relics inside) and on Notre Dame. Though it appears Saint Denis decided to make the walk back to the site of his gruesome end one day, and a stone effigy now stands in the tiny park/square of Suzanne Buisson in Montmartre. A great place for a spot of pétanque while you’re at it, and pretty handy too – not only was Saint Denis a patron saint of France, but also of frenzy, strife and headaches. So no matter if your boules skills need a bit of polishing, you’ll be in good company…

For more info on the cathedral at Saint Denis, click here.