Normally, I’m the sort of gal that doesn’t need an invitation to have a lollop around in a large green space, being a country girl at heart, with fine English sap running through my veins. But a friend with small human in need of celebrating his three whole years on this earth steered me last weekend to a patch which hadn’t previously seen a great deal of lolloping on my part, and picnic blanket and thermos of wine in hand, I headed south on RER B to the resplendent Parc Montsouris.

Literally translating as a very unappealing and frankly incorrect ‘mouse mountain’ thanks to years of linguistic tinkering with its original moniker of ‘Moulin de Moque-Souris’ (meaning the equally perplexing ‘mouse-mocking windmill’), this 15.5 hectare park is nestled in the 14th arrondissement and forms part of the quartet of vast green urban spaces across the capital created by the power duo of Napoleon III and Baron Haussmann (capable of creating much smaller bits of green too), eventually completed in 1878.

Much smaller than the bookend woods Boulogne and Vincennes, it echoes the hilly contours of sister park Buttes-Chaumont in the 19th, though unlike the others was designed specifically in the English landscape garden style. So far, so elegant and refined. It’s construction story though was a million miles away from its classic, cultivated exterior, being built on the site of a former quarry and a network of abandoned tunnels and mines which came to reveal a gruesome cache of some of the six million Parisians that were buried under the city in the 18th century. Around 800 skeletons were removed to their final resting place in famous catacombs of Paris.

Thankfully no hints of its macabre past remain today and you’ll find an undulating park perfect for picnics and frisbee or a good old-fashioned stroll. There’s also a duck pond towards the middle and a café and kiosk for something cold and refreshing should you be stupid enough to forget your thermos of chilled white wine. Kiddles will get all squeaky and excited when they spy the ponies offering rides round the winding paths, and joggers decided long ago that this is in the top five training spots that the capital can muster. 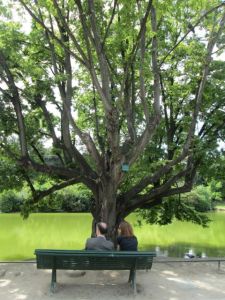 As for us, we took advantage of the wide open spaces and spread our picnic blankets under the shade of a giant tree, surrounded by fellow alfresco diners, snoozing citizens and lounging couples. We might not have seen any mice, but the bubbles (of the soapy-water-blow-into-the-air kind) and birthday cake(s) were far more interesting than any mouse-mocking that could have taken place. As English experiences in Paris go, all that was missing was a delicious cup of afternoon tea.

Reach Park Montsouris by taking RER B or tram 3a to stop Cité Universitaire.