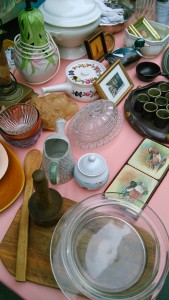 Stuff, eh? We might all assume that our daily lives are ruled by crooked politicians and the chafing chains of bureaucracy, but we’d all be wrong. What actually seems to have the stranglehold over most of our lives these days is stuff. Yep, all of those things that we dedicate our lives to getting and having, before the buzz wears off and the getting and having reveal themselves as soul-sucking monsters with infinite appetites. That cycle of emotions that comes with every possession we encounter which takes us fleetingly through joy, quickly into indifference, finally sinking into guilt as our consumer desires eventually begin to drown us in clutter. Forget bent governments, that Ikea catalogue is really the boss of you. 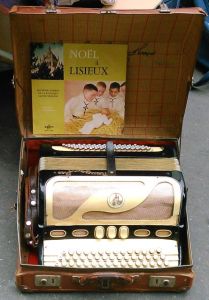 In Paris, many of us manage to escape this ‘power of things’ given that we live in matchboxes (we can only dream of living in shoeboxes), forcing us to adopt a one-in-one-out policy when it comes to possessions. That joyous feeling of having a shiny brand-new thing quickly turns into frustration when you get it home and realise you have absolutely nowhere to put it, besides out the window. But as the generous provider of things, Dame Paris makes sure that we can both inhale and exhale goods as we need them in order to maintain our domestic equilibrium, and at the very same time instil within us the waste-not want-not community spirit that is so very virtuous, but somehow so typically un-Parisian. Behold, the Vide Grenier.

Something also very un-Parisian is the concept of the car boot, a vehicular feature rendered utterly useless thanks to Parisian parking rules dictating that cars need to be caressing each others’ rear ends like excited terriers to be considered properly parked. Forget trying to sell your old vinyl collection from the back of your car, even if you had room, you wouldn’t be able to open the damn thing. Thankfully Parisians have decided not to deny themselves access to the bric-a-brac spirit and every so often spill on to the pavements of the city’s quartiers to either peddle or browse the contents of theirs, and others’ homes (sorry, ‘matchboxes’) in an officially organised event known as a Vide Grenier, or literally ’emptying of the attic’. 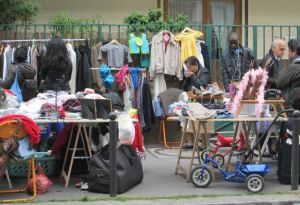 They’re not the most obviously advertised or frequently held events, but they do happen all around the city, and generally only a couple of streets’ worth of vendors means you won’t have to pick up a second pair of shoes on your way round. All manner of second-hand delights await, from shoes and clothes, old records, knick-knacks and furniture, to even the odd teapot or two. To find out if one’s happening in your neighbourhood (permanent or temporary), check out the local council’s website or keep your eyes peeled for posters on telegraph poles or in shop windows nearby.

You have the revered flea markets to peruse of course, if bargain hunting is really your thing, but everyone knows the price hikes in the name of the ‘vintage’ tag that really go on. Besides, from the inside of an authentic Parisian apartment into your hand in exchange for a couple of paltry euros? And right on your doorstep? Ikea may have hotdogs, but it’s fighting a losing battle.