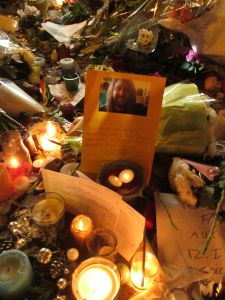 For me, Paris has always been a paradox. And one of the reasons why I started this blog was to address exactly that, exploring both the city’s magic and contradictory grit, trying to find both the rough and the smooth in its inner soul. But no paradox can, and I hope never will, be as painfully stark and heartbreaking as what the world saw on Friday 13th November, just a short and life-changing week ago. How can something so horrific have happened in a place so beautiful? How can there be forces so dark at work in the City of Light?

I also started this blog to explore my passion for words, but on this particular occasion, there really are none to employ. I simply don’t have the vocabulary to negotiate the reality, and barely have the feelings to reconcile my mind to the fact that such a heinous act took place in my home city, some of the tragic sites merely 300m or so from my previous addresses, on pavements I used to frequently tread. I can’t imagine there are many who have the cognitive function to even process the events, let alone attempt to comprehend any rhyme or reason behind the tragedy.

‘I hope the music’s good up there!’

But France has provided us with three words at least, that can begin to offer the faintest glimmer of hope that together the city and the wider community can find a way to suppress the evil and find strength again in grief. Along with an awakening to the true nature of our enemy and of the courage to defeat it, that national triptych ‘Liberté, Egalité, Fraternité’ helps to lift us through our heavy place of mourning on the path to a future unhindered by such blind hatred.

The seeds of the sentiment were first sown by Robespierre during the French Revolution, when the country only had to look inside itself to find a bloody and destructive enemy. It took two more revolutions for the maxim to be adopted again, but semantic arguments relegated its importance until after the liberation of France post-WWII when it became incorporated into subsequent constitutions. Up until last week, it silently and officially encapsulated the national spirit on the faces of postage stamps and the backs of coins. 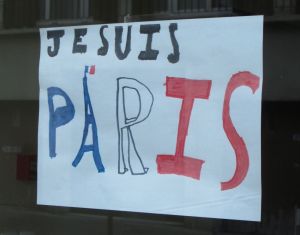 Now it has been immortalised once again as the symbol of unity in the face of a new, modern terror. But it will hold fast as it always has, and infuse our anguished hearts with its message of ‘Freedom, Equality and Fraternity’ and give us the strength to conquer, just as it so powerfully ignited conviction in the past.

This post is dedicated to the memory of Nick Alexander, the dear friend of a dear friend, who will never be forgotten.

Where are we? #garedelest! Find out the story behind this magnificent painting in the main hall in my new blog post! wp.me/p4cITf-yr It may not be the best time for lengthy travel at the moment, but there is beauty to be found at this central station nonetheless! #paris #parisjetaime