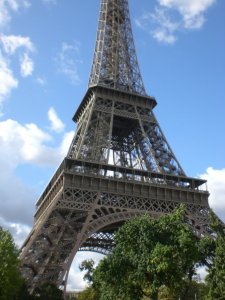 I’ve always wanted to go up in the world. But as you all know, I’m hardly flush enough to afford a penthouse in the 16th, and besides, leaving Granny Flat would simply break my heart. So with one of my best friends in tow visiting from the Motherland entrenched deep inside a new punishing fitness regime, last weekend there was only one way for us to achieve my lofty ambitions, for an afternoon at least. Climb the Eiffel Tower. One. Step. At. A. Time.

The sky’s the limit! the old adage goes. Well… sure Parisian rooftops become a distant tableau the higher you climb, but actually your feet can only take you as far as the second tier, and by then it becomes a case of the thigh’s the limit. Buttock-tuning was a secret aim of our mission, but there’s only so much leg-raising our adult bodies could take. Once the second floor had been conquered there was no way we had enough puff power to hit the very top, and anyway a snaking queue, an extra ticket and the dull prospect of being crammed into a lift to get there meant that we were happy to take in the sights from halfway up. 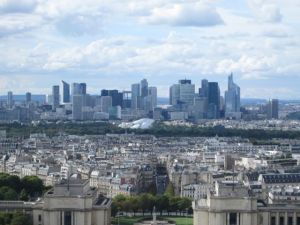 Now I know for those visiting Paris, hitting the famous tower is a bit of a no-brainer. But here’s the twist. Most folk waste their time hanging around in the longer queue to take the lifts, and pay a bit more for the privilege. From September 1st it’ll set you back €11 to get ferried to the second floor or €17 to reach the very top. But where’s the challenge in that? Skip the queues, pay a mere €7 to walk up the way God intended, and use the extra time and money to grab a glass of wine and a well-earned rest at the bar on the 1st floor. Far classier than hopping from one leg to the other in a never-ending line.

Plus, I can’t imagine that the views can be any more stunning from the third floor than they are from the second. Whatever your perspective when casting your eye over the charms of the Grand Old Dame, the beauty always shines through. People-watching from a cafe terrace shows you the finer aesthetics of Parisian life, but from up its most famous structure, you get to see the city as one in spectacular 360° panorama, taking in all of the must-see spots all at once. Rooftops have never been so romantic since Bert and Mary Poppins skipped across them covered in soot in the old Disney classic.

For the daredevils amongst you, 2014 saw the introduction of a portion of glass floor meaning you can lord over the people-ants below like a huge, sightseeing giant (with jelly legs shaking with fear in our case). Those with love in mind will no doubt move in for the smooch at any given opportunity, and there must have been more proposals up the Eiffel Tower than anywhere else in the world. Me, having a squeeze and a glass of wine with my bestie was enough to make my own heart full of amour. And being able to see the quiet beauty of my much-loved home city from the dizzy heights; now that’s amore.

For more info on how to test your thigh power, check out the tower’s official website here.