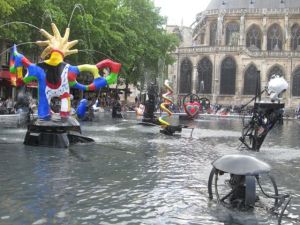 Summer attracts folk to water like bees to a fallen scoop of raspberry sorbet. Paris Plages’ artificial beaches hugging the banks of the Seine are an option if you don’t mind your tides weak and murky, but for me it doesn’t come close to sating my need for the rolling waves and golden sands that I grew up with on the south coast of England.

Fountains provide the continuous liquid tinkle of relaxation if you park yourself next to them, and if we’re talking about out-spouting the rest, then you can’t beat the graceful flow found at Versailles. But maybe your donkey’s out of order, and the city centre is the only option there is. Where to go to soothe the soul with the gentle stream of calming water music? 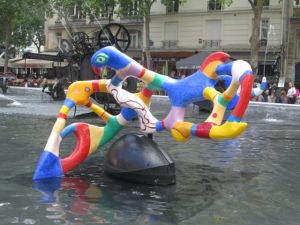 Nestled in a corner of the 3rd arrondissement in the patch more familiarly known as ‘Beaubourg’, you’ll find the modern colour extravaganza that is the Stravinsky Fountain. Just make sure that your eyes aren’t too preoccupied with the neighbouring fantasmic Pompidou Centre, or you’re bound to miss it. And that would be a crying shame – this puppy is like no fountain your eyes will have ever beholden before. If a water feature ever mated with A Clockwork Orange, this would be the happy result. 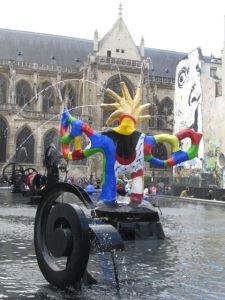 Bright and quirky in equal measure, it comprises of a shallow basin (which doesn’t mean you can hop in and have a paddle) housing sixteen sculptures reflecting the different works of naturalised French citizen and composer Igor Stravinsky. If you study each piece for long enough, you’ll be able to identify such characters as ‘the firebird’, ‘the frog’, ‘love’ and ‘death’. It’s a living fountain too – the pieces move and spray water making those fountains at Versailles look pretty one dimensional in comparison. 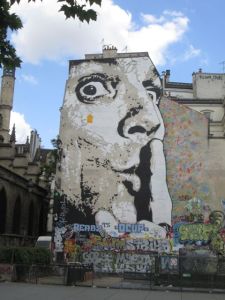 Inaugurated in 1983, it was the work of sculptors Jean Tinguely and his wife Niki de Saint Phalle. Not only does it celebrate Stravinsky’s work, but it was designed to put the Pompidou Centre is some kind of context. On its own, Paris’ modern art gallery is like a scary alien invader amongst the traditional architecture of the city, but with the fountain keeping it company, its progressive, contemporary charm suddenly finds a happy home. Even Dali approves, looking over the water play from a giant mural on a neighbouring wall. 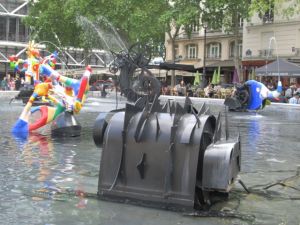 Once you’ve been suitably hypnotised by the liquid enlightenment and spinning parts, don’t hurry off too soon. That modern artistic spirit has spread to the streets, and this is one part of town where you’ll find some of the weirdest and most wonderful street performers keeping the passers-by mesmerised with their own unique brand of grass roots art.

If you’re immune to all of this creativity, all is not lost; on one of the fountain’s perimeters are cafes and terraces galore, including the home of some the best crêpes in town. Hear that dripping sound? That’ll be your mouth watering…