If Paris was a family, the Eiffel Tower would be at the bottom of the tree, the precocious young pup at a mere 126 years old. Being the juvenile show pony of the city kin, it’s no wonder that hordes flock to her as a priority, leaving the rest of the Parisian clan to fill up the lower reaches of the sightseeing list. But you know what tower, dear? It’s far too hot to be shimmying up your height in this face-melting weather, so we’ll leave your daunting climb to a day during much cooler times. 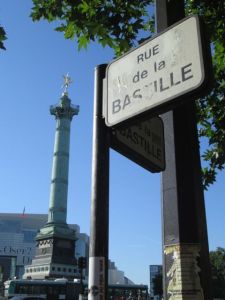 Luckily it’s almost as if the history of Paris prepared itself for this change in temperature, and July is the month to cast our cultural eye, Sauron style, to a different part of town where it’s the country as a complete generational unit that gets our undivided attention. You’re in the mood for a lively celebration? Then you can’t go wrong if you happen to be in the capital on 14 July for France’s Fête Nationale, or ‘Bastille Day’ as us Anglos like to refer to it.

In the Motherland, the damp squib that is England’s national day on 23 April couldn’t be more of a contrast. Over there we raise little more than an eyebrow in celebration to Greek-born Saint George who never actually went to the green and pleasant land, and made himself famous, as legend has it, by having a to-do with a dragon. Yes, that traditional English native animal, THE DRAGON. Here in France the origins of the national celebration may be more recent, but a whole lot less tenous, and a far more historically rich and suitably patriotic affair.

The whole shebang started way back in 1789 when thousands of cheesed-off revolutionaries stormed the Bastille prison, marking the beginning of the French Revolution and setting the wheels in motion for a chain of events that would change the country and its values forever. A feast was held on the same date the following year to mark the momentous occasion, but there was a whole lot of revolting happening during the subsequent 100 years, and the date wasn’t chosen and officiated as the national celebration day until 1880.

The spirit of French unity which prompted its creation carries through to today and a week on Tuesday you can check out the huge parade of military might on the Champs Élysées and watch the heart-shuddering air display pass over the city. The Eiffel Tower can’t help but muscle in on the festivities as restless kids are wont to do, and naturally an impressive fireworks display makes sure we pay enough attention to it.

If you fancy absorbing some of the original revolutionary spirit, head to Place de la Bastille. You won’t find the original prison there as the revolutionaries did a sterling job of dismantling it stone by stone, but if you want to see just what an impressive feat that is, duck into the metro and find the platform of line 5 (direction Bobigny) where you can find the only remaining chunk of foundations and an outline of where the structure used to stand.

Don’t be lumping into the 1789 story the green column standing proud in the middle of the place though – that’s a whole other story of the 2nd French Revolution (oh how they loved making their point back then). Named the July column, it commemorates the 3-day-long July Revolution of 1830 (27-29 July), and the little gold cherub on the top represents the spirit of freedom. Revolutions? Buy one get one free in these parts.

I hope you can appreciate my brevity in telling these tales, with history as rich as this, we’d be here all year if I tried to delve any further. So for now, enjoy the sunshine, embrace the fête and save the French history lesson until the winter.

4 thoughts on “Talkin’ bout a revolution……”