Way back last summer, I filled my reusable canvas grocery bag full of veg and got my toes rolled over by many a granny shopping trolley (which by the way seems to be the height of fashion over here), all in the name of research. The goal was to cast your collective eyes towards the delightful produce on offer at one of Paris’ cheapest markets, nestled along the Boulevard Barbès. You know me, the budget drives the car (or should that be Autolib) in my Paris life, and food is the honorary passenger being chauffeured Miss Daisy-style in the back seat.

Today though I nudged the produce pandemonium at Barbès Rochechouart into second place, when I headed for a long overdue exploration of one of Paris’ equally vibrant and cheap markets, the jewel of the 12e, Marché Aligre (metro Ledru-Rollin). Situated so central you’d expect prices to make your eyes water, the market is in reality a twin endeavour, with the outdoor stalls nestled around a huge place bleeding into the side streets, and a covered hall (the Beauvau bit) dominating the middle.

Carnivores would do well to venture inside to make the most of many a meat merchant, whether it be fresh slabs of marbled beef you’re after, or a rock-hard saucisson as long as your arm. You can pick up some cheese and fish too if your incisors aren’t that keen, or even some horse if you’re determined to test the deepest, darkest corners of your Frenchness.

Outside is far more varied and livelier, with bric-a-brac competing with Levis for a tenner, second-hand clothing and vintage books. The colourful display of veg on offer really gets the cash flowing though, and let’s face it,

out of everything, that’s the stuff we really need (put that replica Ming vase down). Unlike Barbés where price comparison is a futile exercise (and essentially impossible given the density of the crowds), at Aligre you have both ends of the spectrum, from bunches of herbs for 40 cents and assorted lots for a mere euro each, to seasonal greengrocery and the bio crowd, whose virtuous intentions push the prices further towards the heavens. 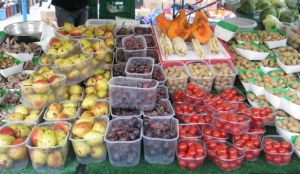 For the finest bargains, timing is the key; head there towards the final hour of the day and you’ll regret not bringing a horse and cart to wheel your own spoils home in. You’ll be able to fill your boots with cut price fruit and veg for mere cents, though be prepared for high spirits and loud voices trying to compete to sell you those two watermelons for a euro that they are adamant you can’t live without.