How many French folk does it take to change a lightbulb? Well that question is completely irrelevant on February 2nd as any request for handy help will fall on deaf ears as the whole country will be far too busy eating crêpes. 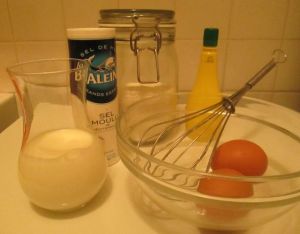 Ah, those delicious golden discs of batter that require such deftness with a frying pan, and untold patience given that most of us only have one with which to manufacture an appropriate stack. Don’t the French eat them between every meal? Aren’t they the warming cold weather vehicle for Nutella in a carbohydrate yin-yang partnership with the fair weather baguette?

Not quite… Crêpes are indeed nestled within the gastronomic heart of France, wafting their goodness via many a batter-toting kiosk, though not something that is considered a daily treat. Once in a while, for sure, but it’s not like the French give a toss even weekly. But that doesn’t mean we’re not allowed to hold a party for our circular, pan-dwelling friends. If food is to be championed, then this is the country in which to champion it in. 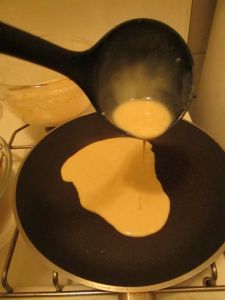 Exactly 40 days after Christmas on 2nd February is when over here we celebrate La Chandeleur (Candlemas for the non-French speakers), when we do just that. It’s the one day of the year where crêpes are held aloft and idolised, though they can’t claim to be the belle of the ball as there’s a hell of a lot of traditional legend and religious symbolism tied up on the same date in the calendar.

Depending on which religion you subscribe to, the 2nd February is the day to celebrate the presentation of Christ at the temple, the feast of the purification of the Virgin, or the blessing of the church’s beeswax candles. Non-religious traditions dictate that in France, the UK and the USA the weather on 2nd February predicts the forecast for the rest of the year, in Scotland a big snake will appear from the ground (which promises not to ‘molest’ anyone), and if you’re a sailor, it’s a day to give a jaunt on the ship a miss.

In France, the ‘crêpe party’ element (as my friend Arthur likes to call it) means that superstition is expressed through the medium of food, i.e. the lowly pancake. It’s not about using up ingredients in time for Lent which underlies the Anglo tradition of Shrove Tuesday (this year 13th February), but more a celebration of light, and the transition between the last dark days of a cold and sombre winter and the fledgling days of the approaching spring. The crêpe is supposed to reflect the image of the round, golden disc of the sun.

As well as making sure your wrist action is on form to indulge in the obligatory tossing, tradition also states that the first pancake out of the rank needs to be folded up and placed in the wardrobe to encourage a plentiful and abundant harvest for the coming year. It sounds to me like that’s just a recipe for attracting an abundance of the neighbourhood mice, but hey, maybe enticing them from the fields and into the home is the whole point. 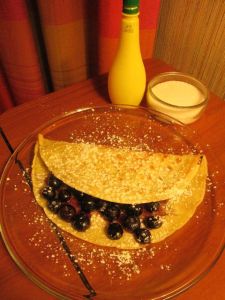 Let’s assume you’re a sensible, rational being and you’ve opted for crêpe worship above any other 2nd February signification. The only choice now is what to fill your spoils with. Banana and Nutella, classic sugar and lemon, or a sinful mountain of cheese and ham? Today I opted for (in practice for the big day) a savoury oven baked roll up of crêpes (made with beer instead of milk) filled with veg and a goat’s cheese sauce topped with parmesan, followed by a sweet duo of blueberry and honey, and good ol’ lemon and sugar. Now I can’t move (lucky for you my fingers still can).

This Friday residents of France can follow my stunning example, those in a country where pancakes are fashionably late will have to hop on the spot until it’s your turn later on in the month. Just look into the light whilst you’re at it.