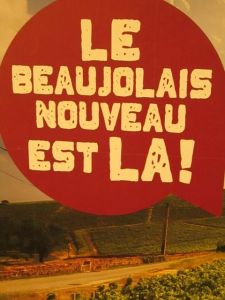 As marketing campaigns go, France is the king. This is the country in which a dreadlocked man (former tennis and music star Yannick Noah) is chosen to promote personal grooming products (it later turned out to be mostly shower gels, but gee, I was confused there for a while). Last year market leader Sushi Shop released a box of Kate Moss-inspired rolls. Presumably they wanted to give the impression they’d infused their raw fish with Champagne effervescence and a nicotine aftertaste.

But mismatched celebrity/product pairings aside, one of the major triumphs has to be the cult of wonder that shines out of the mist every November surrounding the release of Beaujolais nouveau. You take one of France’s shoddiest wines, create a festival around it, and every fool dashes out to taste the stuff as if it were the last drop of Dom Perignon in the world. As marketing strategies go, it’s quite frankly genius. Promoting a mediocre wine to the dizzy heights of fame (and increasing profits a million-fold in the process) is no mean feat. Pretty impressive if you think about it. 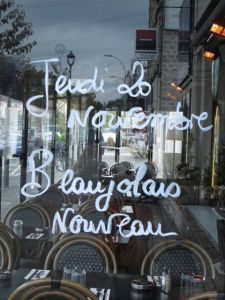 At this time of year you can’t pass a café window without seeing the excited scrawl upon it ‘Le Beaujolais nouveau est arrivé!’ Beaujolais nouveau has arrived! In a nutshell, the tradition is this – a vineyard mouse’s whisker after the grape harvest (in wine terms at least), the bounty is speedily pressed, bottled and distributed to eager, salivating punters.

And it’s not just France either. Bottles are shipped all around the world every year, released at 12.01am on the dot on the third Thursday in November (so tomorrow the 20th) where they are met with welcoming arms by a global audience who afford it an almost cult-like status. The idea is to chug back on a glass and toast the wine gods (and producers of course), for letting us have another year’s worth of delicious produce to drink. What’s not to celebrate?

Well, the festival abstainers don’t see an awful lot of point in indulging in a drop that is considered by most to wildly inferior to the rest of the country’s offerings, dismissing it as a sneaky marketing ploy (which in truth it is). And they’d be partly right. Made from the Gamay grape, Beaujolais nouveau is the lightest red money can by, and the speed at which it hits the shelves means the finished product is juvenile and simplistic, hardly worth the glass it’s contained in. 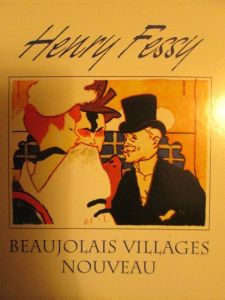 Sure it’s nowhere near a Grand Cru, but if you’re that picky, you’ve got the rest of the year to drink Margaux if you want. Beaujolais nouveau was always meant to be drunk young and drunk fast, and if you prefer a more aged version, you can wait for the later-released Beaujolais (that drops the ‘nouveau’), boasting a deeper complexity.

Personally, it’s one of my favourite French festivals, and I’ll be raising a glass in its honour. Not for the ‘delicious’ taste, but it marks the beginning of a new year of vintages, and it’s a chance to celebrate French wine on a more general level in absence of any other festivals championing any other type of wine the country could muster (get on to that please Monsieur Hollande). If it really is the sneaky marketing aspect that persuades many a nay-sayer to give it a wide berth, I’d say Christmas could be a pretty quiet one this year…