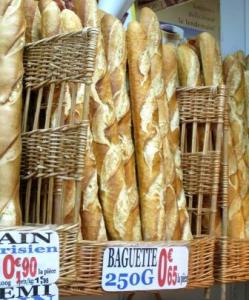 Sometimes there are just perfectly coordinated moments. When you hit your breakfast cup of tea like it’s your birthday the minute it reaches core temperature. Arriving at the bakery just as the baguettes come out of the oven. Getting a seat on a crowded metro in rush hour (and not ending up sitting next to someone with flailing elbows and a personal hygiene problem).

I feel like this is one of those moments. Summer has come back for a welcome September encore, which means it’s salad time once again just as the food-o-meter was swinging towards soups and stews. We’ve got the last of the tomatoes to dive into before they disappear until next year (because winter tomatoes are about as worth it as vegan cheese). And I’ve got a freezer full of dog ends of baguettes not eaten because we were having too much fun at the dinner parties I’ve thrown recently. That could only mean one thing. Panzanella salad.

As lovely as baguettes are – hell, it’s practically a French religion – the crusty darlings do have a major flaw in that they are at optimum tastiness for all of ten seconds before becoming a hardened bread stick baseball bat. Rather than mourning the loss of that tiny gnome-sized window of deliciousness, embrace the stale remnants as the inspiration for this easy-as-pie Italian salad.

Like many of the world’s best dishes, there isn’t a definitive recipe per se (every Italian reader is probably hitting the screen in violent disagreement with said rock-hard baguette right at this very moment), but there are must-have inclusions. Proper ripe tomatoes, and if you can find the coloured ones even better. Stale baguette (or ciabatta if you like) chopped into decent chunks. Olive oil, salt and pepper, red wine vinegar and basil. That’s the classic foundation, but there are plenty of different recipes that add other delights like capers, anchovies, peppers and cucumber, even olives. It’s really up to you.

The important thing is to get all of the flavours to make friends with each other before you serve it up. So get chopping and let everything mingle for a bit (half and hour to an hour should do it, just don’t let the bread get soggy). Great on its own if you’re eating light, or you can serve it with a nice piece of fish or steak, however the mood takes you. The picture up above is my attempt, see if you can’t raise the bar a bit higher. Game on (cooking, not baseball – haven’t you been listening?).