Living in Paris is thirsty work, pure and simple. Climbing all those stairs, dodging all that dog poo, sitting on a terrace icily commenting on the passers-by… A couple of espressos just doesn’t equal adequate hydration for all of that energy expenditure.

I like putting on my adventure shoes and meandering around the city (we all know that by now), and to do that and stay properly watered, I could really do with one of those fire service water trucks to follow me around to make absolutely sure my levels stay where they should be. But trucks + stairs = sheer calamity, and I’m sure I’m not alone here, pompiers + Kim = utter distraction. Hardly a master plan. 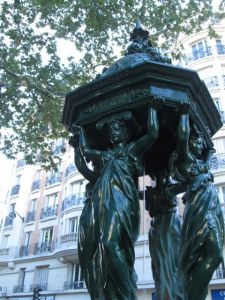 Plan B would see me dashing into the nearest supermarket and arming myself with the Parisian accessory du jour, a bottle of mineral water, which I would sip stylishly as I went on my merry way. But I’d probably need a few of those puppies given my penchant for long, feet-exhausting strolls, and although I’m part donkey, always carrying something heavy with me, when taking in the sights, I favour lighter travel. Plus ‘save the planet’ and all that, naturally.

Thankfully, Paris provides in stunningly beautiful fashion the perfect solution, requiring a bit of delicious digging – the Wallace fountain. If you’ve clocked up any kilometres in the city at all, it’s likely that you’ve already come across these delightful H20 stations, though I know plenty of Parisian longtimers who are still none-the-wiser as to their existence. Given that we have taps in every home and all, they might seem a little superfluous, albeit very lovely to behold. But let’s backtrack a bit as there’s a pretty neat story behind their construction. If you’re sitting comfortably, I’ll begin.

Way back in the 1870s water in Paris was as difficult to come by as proper sliced bread is today. So difficult in fact you had to pay, and beer and wine were only a smidge more expensive. If you did fancy buying the stuff then it was hardly worth it as it came mostly from the Seine where sewage and other assorted nasties were routinely dumped (mmm-mmmm!). So unsurprisingly, the city was filled with poor people favouring beer and wine and getting far too jolly for their own good (gosh, sounds a bit like the modern-day motherland).

Luckily though, at that time the trend was for the stinking rich to dig into their pockets and help the poor, funding numerous philanthropic projects like hospitals and the like. Very Bill Gates. A man called Richard Wallace (an English gent no less) happily obliged and invested much of his recently acquired fortune into the city, the Wallace fountains being his most famous contribution.

Intended to address the moral problem of public drunkeness and to make the city look prettier, they were designed by Charles Auguste-Lebourg and painted in municipal green. The principle design (of which there are 67, count ’em) features four ladies or ‘catyrids’ representing kindness, simplicity, charity and sobriety. Aw. There are three smaller lady-less models dotted around, but it’s the elegant tallest form that is the most well-known.

Before you put your nose in the air and toddle off to Monoprix, the water is still perfectly safe to drink, and remains to this day one of the only sources of fresh drinking water the homeless in the city have access to. You’ve only got a couple of months to give it a try though, the fountains only run from March until November, to stop the pipes freezing in the winter. Then you’ll just have to give them a stroke instead.