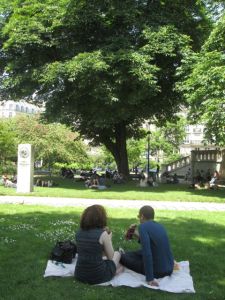 Ah sunshine, there you are. Since you’ve been so elusive these last couple of months, I’ll forgive the fact that you’ve decided to bring your golf-ball-sized hail storm buddy along for the party, but the rough with the smooth and all that. Now that you’ve taken to hanging around a bit more frequently, we can all get on with the serious business of finding a patch of luscious green space to lounge around in.

Being from the country, I’m a little picky about my leafy bits, and quite frankly get kinda cranky when I don’t spend enough time surrounded by trees. But thankfully I moved to the right place and Paris has kindly provided me with enough green space to lollop around in to my heart’s content, which is no mean feat given the city’s diminutive size and sardine-like configuration.

Now I say Paris is responsible for the impressive show of greenery, but really we have just one man to thank – Baron Haussmann, that famous city planner who knocked down half of Paris in the mid-19th century and built it back up again into the smashing city we have today. (He wasn’t legally a Baron though, he just called himself that. Clever, eh?)

Maybe he’d watched that ‘whoops-a-daisies’ scene from Notting Hill too many times, the one where Hugh Grant and Julia Roberts break into that charming garden in the middle of that London square, but the man sure had a thing for parcels of grass. Not only did he create the two forested book-ends of the city, the bois Boulogne and Vincennes, but also some of the nicest large parks around, including Buttes Chaumont and Montsouris.

But his real act of class was creating a plethora of small squares throughout the capital intended to be no more than 10 minutes away from each and every address, for rich and poor alike. Before he got to work, there was only one in the whole city. Take a look on a map – those green patches aren’t mould you know, they’re delicious stamps of living, breathing nature.

And we’re not only spoiled by the flora, there are benches for afternoon mulling, climbing frames for the miniature citizens, paths for meandering and even the odd bandstand. Oh, and if you’re lucky there might be a public toilet, and we know how rare they are in this town.

So before you get attracted like a magnet to the same patch of nature that the rest of Paris is drawn to on sunny day (shoulder to shoulder in the Place des Vosges anyone?), consider popping round the corner and discovering the small urban oasis peeking out from between the buildings in whatever neighbourhood you happen to be in. The Baron commands it.

2 thoughts on “Parks and recreation”