Whenever a person thinks of France, and I’m really sticking my (frog’s) leg out here and generalising, I can be almost certain that the flashing procession of images contains a market in there somewhere. The place is fabled for them, making sure our happy bellies are full of technicolour produce, to-salivate-for meat and without a doubt the smelliest cheeses in the world.

Having lived in Paris for over five years (so I can safely consider myself somewhat of an expert), I’m well used to the gulf between the glittering tourist clichés and the more mundane and unspectacular reality of what the city is actually like. But these bustling markets, filled with a plethora of goodies and traders trying to push juicy figs into your mouth as you idle past, straddle the both ideas, being both the romantic cliché, and the happy reality. 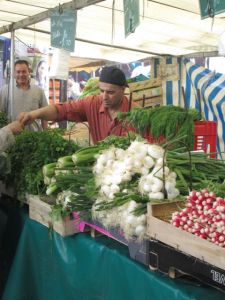 Just as the 20 arrondisements are a patchwork of different cultures and salary brackets, so is the catalogue of the city’s produce markets. Ranging from the organic wonderland of the Boulevard Raspail where the prices can leave you saucer-eyed and open-mouthed, to the lower end of the scale where you can fill two carrier bags full of fruit and veg for 5 euros (and I’ve done it), there are different markets to see you through every day of the week.

Given the premise of this blog though, it’s only fair that I point you towards the cheapest. After extensive research (I still have the fig moustache), I can confirm that if it’s veggie bargains you want, then it’s to Barbès Rochechouart you need to head. The market takes place every wednesday (8am-1pm) and saturday (7am-3pm), extending along Boulevard de la Chapelle, under the metro line (so you’ll be nice and dry if it rains).

Along with the odd hardware and clothes stall, there’s are plenty of the usual suspects selling fruit and veg, cheese, fish and meat, and a handful of specialists selling delights such as olives and spices. You’ll also have to make sure you look out for the herb guys who plonk themselves right in the middle of the pedestrian traffic – if not for their fragrant green bunches, at least to save your shins.

It’s a busy ol’ affair, so if you’re not keen on elbowing through the crowds, competing with the masses to get served, or losing your heels via a fellow shopper’s loaded trolley being pulled with reckless abandon, then you’ll have to get there early. Given the rock-bottom prices, you won’t find a whole host of organic or local produce being sold by ruddy-cheeked farmers, and none of that ‘posh’ veg (watercress, asparagus, kale), though the quality is reasonable and the sales patter always lively. Who needs bananas exactly the same size and length anyway??

For more information on this market and others near you, check out http://meslieux.paris.fr/marches

June has to be one of my favourite months for meandering around the city after you’ve punched off the clock from work. Its long, glowing evenings bathed in late sunlight mean it’s the perfect time to have a wander round the quartier, head to the park for dinner picnic-style and pretty much do anything to avoid being holed up at home in the good weather (Granny flat I love you, but we all need a change of scenery once in a while).

The height of June’s powers is the 21st, the longest day of the year, where the sun sticks around as long as it possibly can, like the tipsy uncle at a wedding who just doesn’t know when it’s time for bed. Admittedly it sucks if you’re trying to get an early night this time of year, since going to bed when it’s still light makes you feel five again, but we should be able to put up with a lack of sleep for at least one night before the seasonal train plunges back down the hill towards winter again.

But happily, this year we don’t have to. Forget the dusky walk in the park at 10pm, there’s only one thing to do on the longest day, this year a saturday, so you can stay out all night until the sun rises again if you want without having to worry about your head falling onto your neighbour’s shoulder on the metro the next day. You’d be a complete fool not to get involved in the famous Féte de la musique, drowning the city with musical love this 21st June.

For the uninitiated, the premise is simple (and by no means limited to Paris; this is a European-wide thing). As many of the city’s bands, DJ, singers, performers, and well, musicians in every form (and this could and sometimes does mean a dude playing the spoons on a corner) as Paris can muster, coat the streets and fill the air with whatever brand of music it is that flows from their beings – all for free.

Sometimes this might be within almost touching distance of each other (often the music mixes in a fashion akin to an aural tuna milkshake), but there’s plenty scattered around to suit every taste whether it be tucked in a side street, spilling out from an open-fronted pub or slap-bang in the middle of a crowded avenue’s pavement. For those that gave up playing the spoons long ago, all that is left to do is wander around and absorb the melodies, stopping to appreciate the rhythms being peddled at your leisure. You can even do this with a beer in your hand as many establishments have special beer stations set up for the occasion (plastic cups, mind).

The music spreads to all corners of the city, though the entertainment is often dictated by the quartier you’re in. You’ll find hipster DJs scattered around the 11th for example, and some classier classical stuff in the arches of the Place des Vosges. But there are weird and wonderful things to see wherever you go; last year I spent at least 30 minutes transfixed by an electro singing duo dressed in fisherman’s gear (yellow rubber dungarees and all – and little else) shaking their tail feathers in an actual fish shop.

It’s generally an evening affair extending into the dark hours (but things calm down a lot after midnight), but you might see a handful of acts getting started during the afternoon. Night owls get to take advantage of the late-opening of the metro though, which runs right through the night for the occasion (3.50 will secure you a ticket for the whole night). Check out the official national site http://www.fetedelamusique.culture.fr for more detailed programme information. And pray that the rain is about as unlikely as a Showaddywaddy comeback gig.

Thanks to Sweet Knuckle Unicorn for the photo!

Ah sunshine, there you are. Since you’ve been so elusive these last couple of months, I’ll forgive the fact that you’ve decided to bring your golf-ball-sized hail storm buddy along for the party, but the rough with the smooth and all that. Now that you’ve taken to hanging around a bit more frequently, we can all get on with the serious business of finding a patch of luscious green space to lounge around in.

Being from the country, I’m a little picky about my leafy bits, and quite frankly get kinda cranky when I don’t spend enough time surrounded by trees. But thankfully I moved to the right place and Paris has kindly provided me with enough green space to lollop around in to my heart’s content, which is no mean feat given the city’s diminutive size and sardine-like configuration.

Now I say Paris is responsible for the impressive show of greenery, but really we have just one man to thank – Baron Haussmann, that famous city planner who knocked down half of Paris in the mid-19th century and built it back up again into the smashing city we have today. (He wasn’t legally a Baron though, he just called himself that. Clever, eh?)

Maybe he’d watched that ‘whoops-a-daisies’ scene from Notting Hill too many times, the one where Hugh Grant and Julia Roberts break into that charming garden in the middle of that London square, but the man sure had a thing for parcels of grass. Not only did he create the two forested book-ends of the city, the bois Boulogne and Vincennes, but also some of the nicest large parks around, including Buttes Chaumont and Montsouris.

But his real act of class was creating a plethora of small squares throughout the capital intended to be no more than 10 minutes away from each and every address, for rich and poor alike. Before he got to work, there was only one in the whole city. Take a look on a map – those green patches aren’t mould you know, they’re delicious stamps of living, breathing nature. 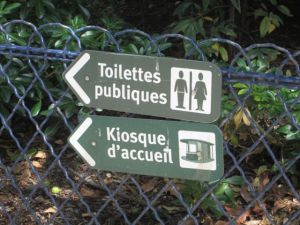 And we’re not only spoiled by the flora, there are benches for afternoon mulling, climbing frames for the miniature citizens, paths for meandering and even the odd bandstand. Oh, and if you’re lucky there might be a public toilet, and we know how rare they are in this town.

So before you get attracted like a magnet to the same patch of nature that the rest of Paris is drawn to on sunny day (shoulder to shoulder in the Place des Vosges anyone?), consider popping round the corner and discovering the small urban oasis peeking out from between the buildings in whatever neighbourhood you happen to be in. The Baron commands it.

How good is summer?! All that heat, sunshine, and… oh. 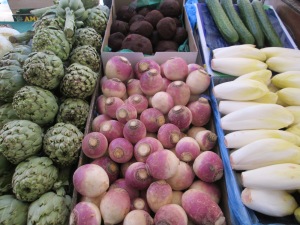 But at least the food is good. The good ship asparagus is soon to be sailing off (and I for one will probably shed a tear), but there’s plenty of welcome fruit and vegetable friends in town to huddle under it’s crown. I say plenty, and darn well mean it – June is the first month of the year when all of the more colourful, and well, frankly more exotic varieties (sorry root veg) pop their heads out to say hello. And are promptly eaten.

Here’s a list of some of the best stuff to be eating now. Time to take the wheelbarrow to the market methinks…

Spoiled we are, frankly spoiled. Enjoy!