There are a few things I miss about life back in old Blighty. A fluffy loaf of sliced bread. Readily available kale. Customer service… But one of the things I most lament is the complete absence of charity shops in Paris, probably a controversial opinion if you’re a reader from the UK, sick of seeing them popping up on your high streets like an unfortunate disease.

Now I can’t profess to knowing an awful lot about fashion. My clothes fit, I reckon I’ve got the classic look down, but I’m in absolutely in no danger at all of being bothered by one of those ‘style on the streets’ journalists, scouring the pavements for the city’s best dressed. My cupboards are full of many items of clothing that are not, and will never be friends.

I hope that explains my love of charity shops. Who cares if you make bad choices? For a few euros it doesn’t matter if you pick up a couple of what were you thinking?! items, never to be worn again. Plus I’ve fallen out of love with many of the high street shops dotted around the city, who either seem to be luring us in to some kind of elaborate fashion joke, or relying on clothes made by people with their eyes closed. 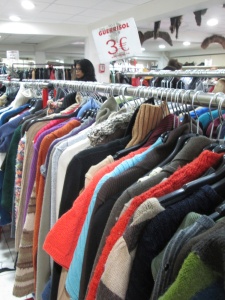 But in Paris, charity shops are likely to be viewed as the antithesis of modern fashion. The awkward 90s teenager dressed in gravity-defying jeans and a tie-die t-shirt versus Audrey Hepburn. Sure there are plenty of ‘vintage’ shops to be found, but to me that’s just a word that justifies whacking another 20 euros on a second-hand piece of clothing. I want to work for my spoils, and get change from a 10 euro note for the privilege.

Imagine my delight when I came across Guerrisol the day I moved into my new quarter, a second-hand wonderland of clothes, shoes, bags and bric-a-brac. Now a charity shop it isn’t, it’s a commercial operation, but the prices are spirit-buoyantly low. It’s possible to rummage around, and walk off with a complete outfit, including shoes, for just over a tenner.

Now, just as in charity shops back home, there is an awful lot of tat, and whilst there are some clothes arranged on rails, there are a few tables piled high with second-hand goodies that demand some quite serious rifling. But it’s always possible to find some gems if you have the patience, like I did this morning when I walked off with a cream, fine knit merino jumper from Banana Republic for 3 paltry euros.

Maybe rummaging through piles of clothes smelling of decades past just isn’t your thing. But I personally love the challenge, and the knowledge that I won’t be walking down the street dressed like everyone else head to toe in H+M, Zara and Mango’s latest seasonal offerings (although you will find old lines from all three here). Plus there’s something quite virtuous and save-the-planet-y about recycling someone’s cast-offs rather than buying new.

You’d better be quick if you’re interested though, there are plenty of Parisian fashionistas catching on to this trend and scouring through the rails, so you just might have a fight on your hands… But handily there are eight shops in total in the city (mostly based up and around the 18th, catering for women, men and kids, so in theory there should be plenty to go round.