More than any city in the world than I’ve ever had the pleasure of visiting (and jeez, I’ve been around), Paris is the one that lends itself the most to walking. Given its small size and my talent for pounding the pavements, we really are a match made in heaven. Though as much as I like walking, I’m actually not very good at it in a leisure sense, one of my friends remarking that he’s never seen anyone who walks as fast as I do. And I’m just a shade over five feet. 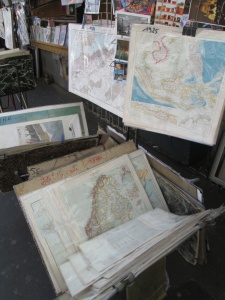 But books are another of my loves, and it is them, and only them, that have the power to slow me down. And where literature is concerned, Paris sure knows how to put on a good show. Enter the city’s bouquinistes, those riverside second-hand book vendors keeping my footfall speed to an absolute minimum.

Being a river city, with the famous Seine snaking from one side of the capital to the other, Paris is made for strolling. You’ll see many of the famous sights as you meander along the connecting quais, which is quite lovely of course, but I much prefer to keep my nose trailing past the goods on display in the little green pop up shops where the bouquinistes earn their crusts.

If old books are your thing, then this is second-hand book utopia. Although… for the large part they are written in French, so you’ll either have to brush up on your language skills, or choose one full of pictures. But if you’re anything like me, just being in the company of an army of resting books makes me feel quite calm and content, without the need for any money to change hands whatsoever.

If smelly used books don’t make your fingers tingle, then you can content yourself with flicking through the array of old maps, newspaper clippings, adverts and postcards that are on offer, taking you back into the past via an alternative portal. Or if tourist tat is the only thing that gets your engines burning, then you’ll be quite at home choosing a set of Paris coasters, as opposed to a weighty tome for your coffee table. Whatever you’re after, the booksellers can’t be relied upon to be there every day rain or shine, but you’ll usually find a few along the route braving the weather.

Existing since the 16th century, the bouquiniste trade may be one of the humbler parts of Paris history, but the vendors have lived through almost as much drama as contained between the pages of the books they sell, from revolutions to devastating city floods. And they are much celebrated too, a popular subject of artists trying the capture the city’s soul, the quaint green book huts are also included on the UNESCO world heritage list as part of the wider area of the banks of the Seine. Which is probably where that Kindle of yours belongs, no?