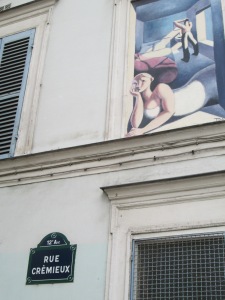 Now, I would class myself as an über-tourist. When I go to a new place, I like nothing more than tying up my most comfortable shoes, pounding the pavements and exploring every inch until my feet can take no more. This has led me to consecutive 15-mile day treks across New York, and some hairy times in three-lane road tunnels in Hong Kong – a high-level-living wonderland definitely not made for walking in – but those are tales for a different blog.

Honestly, you could spend a small fortune in Paris shipping yourself from tourist sight to tourist sight, holing up in a typical Parisian bistro every evening, and have a super old time. But that’s not how I roll as a tourist, and most definitely not how I operate when I’m a local, filled with a desire to avoid the well-trodden path and get right down into the city’s unseen crevices to find the real heart and soul of the place (the grimy and mundane, as well as the good). 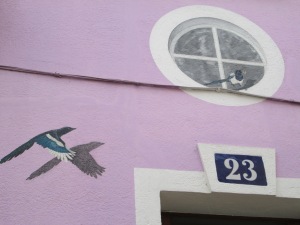 Strolling around near Gare de Lyon one fading summer evening in the 12th arrondisement, my curiousity was rewarded as I turned from one of Paris’ main transport arteries, lined with generic hotels, shops and hurrying pedestrians, into a small street so delightful, I almost instantaneously forgot I was in Paris. (It’s worth noting here that I don’t own a smart phone, and I tend to rely on an old paper pocket map, preferring the ‘pot luck’ method of city exploring. Seems to work). Had I not been meandering around as many streets as my feet could take that evening, chances are I would have missed it. 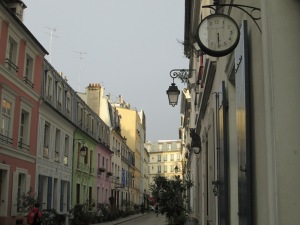 It’s name is Rue Crémieux – which suggests it might mean ‘Creamy Road’, which would have been fitting, given how the bright and pastel colours of the charming houses lining the sides conjure images of fruity ice-creams and sorbets, making the mouth water. But in reality (and here goes to prove that there actually isn’t romance round every corner in Paris), the road is named after a lawyer and politician Alphonse Crémieux, a member of the Government of National Defence, who gave jews French nationality in Algeria. It’s almost like discovering candyfloss is actually named after an accounting technique. 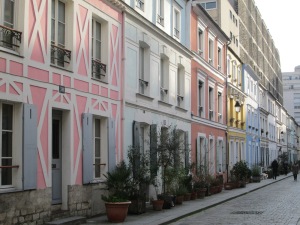 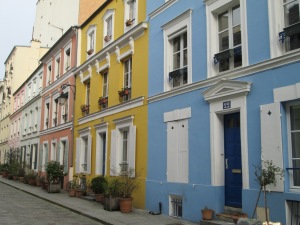 The road was opened in 1865 (though named after Crémieux in 1897), and it still bears the marks of the great flood of Paris in 1910. It’s lovely to have a walk down at any time, and is thankfully pedestrianised so you don’t have to dodge the brazen Parisian traffic. The best time to check it out though is in the balmy sunshine when the colours are at their best, and the unbelievably fortunate residents spill out onto the pavement in front of their dwellings to enjoy a glass a wine, a round of cards, or to watch the people go past that aren’t lucky enough to live in an actual house (for those non-Parisians, houses are extremely rare in Paris – central at least, where shoebox apartments are the norm). Once at the end, find the nearest tabac, but a lottery ticket, and maybe next year, it might just be you sitting there instead.